Liber Novus is a hand-written and richly illustrated folio manuscript that Jung worked on from 1915 to circa 1930. Since it is a red leather-bound book, he usually referred to it simply as The Red Book.

Liber Novus was never published during Jung’s lifetime, and after his death his estate refused publication. It was finally published in 2009, and you can read more about why and how in our article The Red Book (published 200).

Which language was Liber Novus written in?

Most of the writing in the original manuscript is in German, but there are also quotes in Vulgate Latin and a few inscriptions in Latin and Greek. A brief quotation from the Bhagavad Gita, written in the margin, is in English. 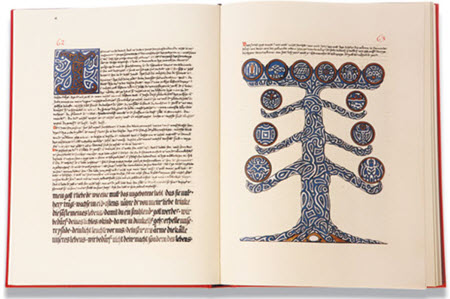 Two-thirds of the pages in the original manuscript are adorned with Jung’s own illuminations of the text. (An illuminated manuscript is one where the text is supplemented with decorations such as miniature illustrations, marginalia and initials.)

The initial seven folios (fourteen pages, recto and verso) of the book are sheets of parchment created in a highly illuminated medieval style. They are referred to as Liber Primus – the First Book. Jung, however, rapidly discovered that this parchment wasn’t good at retaining paint. Ink bled through and the paint became chipped. Because of that, he stopped using this type of parchment and instead ordered a red leather-bound notebook with roughly 600 blank pages of a more suitable quality. You can read more about it below.

In 1915, Jung commissioned a folio-sized volume with roughly 600 blank pages of paper. The book is bound in fine red leather adorned with gilt accents, and the paper is suitable for handling both ink and gauche. Jung had the top of the spine stamped with the book’s formal title: Liber Novus. (Although he usually referred to it simply as The Red Book.)

Over the course of approximately 15 years, Jung filled around 200 of the circa 600 pages with texts and illustrations. So, what happened to the seven parchment papers (Liber Primus)? Jung integrated them in the new book by interleaving them at the beginning of the volume.

All in all, the volume contains 205 completed pages:

Exhibits of the original

The original Red Book is kept in a bank vault in Zürich together with many other items from Jung’s archive.

Starting in October 2009, however, the original Red Book embarked in a museum tour to celebrate the publication.