Paul Achilles Jung was a rural pastor of the Swiss Reformed Church, and he was leading a rather impoverished life at the time of Karl Gustav’s birth, even though Paul was the youngest son of a successful physician in Basel.

Emilie Preiswerk belonged to an old Swiss family, and she was the youngest child of Samuel Preiswerk, a well-established Basel churchman and academic who lived in 1799-1871, and his second wife. Samuel Preiswerk was the head of the Reford clergy in Basel, and a specialist in Jewish, Hebrew and Hebraic studies. Samuel Preiswerk had been Paul Jung’s professor when he studied Hebrew at Basel University. 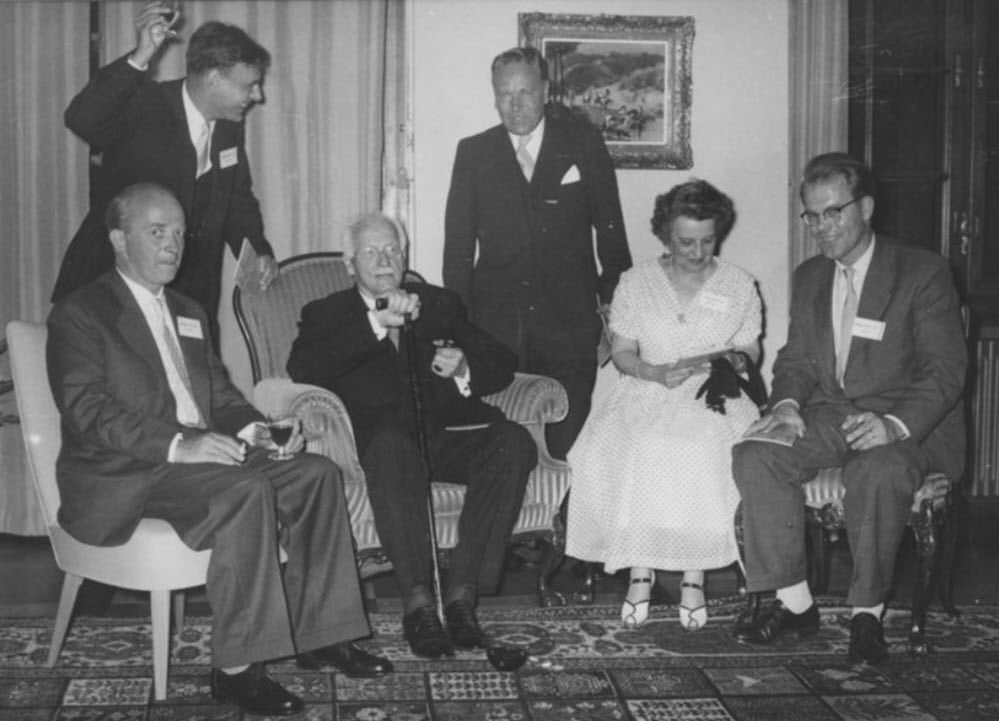 Karl Gustav Jung was named after his paternal grandfather Karl Gustav Jung, a successful Basel physician of German descent who lived in 1794-1864. As a university student, the grandson changed the spelling of his own name from Karl (modernized spelling) to Carl (the older spelling).

Karl Gustav Jung was born on 26 July, 1875, in Kesswil, a village located in Thurgau, Switzerland.

When he was six months old, his father got appointed to a parish in Laufen (in the canton of Zürich) which was a bit more prosperous than Kesswil. Despite this improvement in material living standard, family life was difficult and tension grew between Paul and Emilie.

Emilie suffered from mental health issues, including depression. She usually seemed okay during the day, but believed that spirits were visiting her in her bedroom at night. Later in life, Carl Gustav Jung would write about how his mother became strange and mysterious at night.

Eventually, Emilie needed to leave the family to receive several months of medical treatment at a hospital near Basel. (Her diagnosis was for an unknown physical ailment.) The young Karl Gustav was left to live with his mother’s unmarried sister in Basel for a while, before being brought back to his father in Laufen.

As a boy, Karl Gustav had a better relationship with his father than with his mother, and he would go on to associate women with unreliability and men with a curious combination of reliability and powerlessness. Later, he would somewhat revise this stance, writing that “I have trusted men friends and been disappointed by them, and I have mistrusted women and was not disappointed.”

When Paul Jung had worked in Laufen for three years, he requested a transfer and the family moved to Kleinhüningen, which was then still an independent village on the outskirts of Basel. Moving closer to Basel meant that Emilie Jung could see her Preiswerk family more, and this seems to have improved her mental health.

When Karl Gustav was 12 years old, and about to complete his first year at the Humanistisches Gymnasium in Basel, he got into an altercation with another boy and was pushed to the ground so hard that he briefly lost consciousness. (Jung would later allege that incident was indirectly his own fault.)

During the incident, a thought came to him —”now you won’t have to go to school anymore“.

From then on, Karl Gustav would faint during walks to school and when trying to do homework. He was suspected of having epilepsy and was kept away from school for six months. One day, he overheard his father speaking to a visitor about his son’s future ability to support himself. Karl Gustav realized his family’s financial hardships and how he had to strive for academic excellence to be able to support himself. He immediately went into his father’s study and began cramming Latin grammar. He only fainted three more times before breaking the habit.

Later, Jung would recall how this “was when I learned what a neurosis is“.

Jung has described himself as an introverted child who spent a lot of time in solitude. He believed that he had two personalities: one that was a contemporary Swiss schoolboy and one that was an adult man from the past, suited to the 18th century. This second personality was dignified, authoritative and influential.

As a boy, Jung took a wooden ruler and carved the end of it into a tiny mannequin. He placed this little figurine inside a pencil case together with a stone that he had painted, and hid the whole case in the attic. He would then periodically write messages on tiny sheets of paper using his own secret language, and place them inside the case in the attic, and doing so made him feel safe and at peace.

As an adult, Jung realized the similarities between his actions and the rituals tied to totems in various cultures. According to Jung, his boyhood ceremonial acts were intuitive and unconscious rituals. Jung’s writings about the collective unconscious, archetypes and symbolism were in part inspired by these childhood experiences with his “totem”.