A period of vivid imaginations

After breaking with Sigmund Freud in 1913, C.G. Jung went through a mentally difficult period when he saw visions and head voices, and worried about a possible psychosis or schizophrenia. He referred to this epoch of his life it as a “confrontation with the unconscious” and “my most difficult experiment”.

It was a period when Jung intensely reconsidered his personal and professional path. It also largely coincided with World War I (1914-1918), a period when Jung worked with British soldiers and officers in an internment camp in neutral Switzerland. 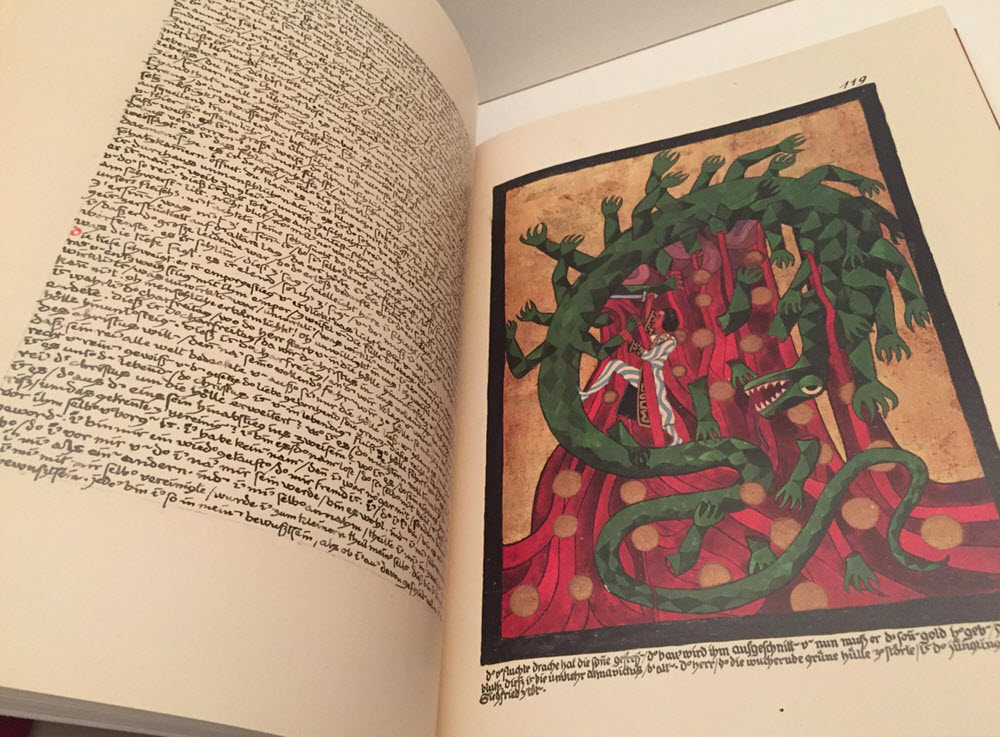 Writing down his experiences

Eventually, Jung decided that his experiences, albeit horrible, were also valuable. He began to induce hallucinations (“active imaginations”) and record as much as possible about them in journals. The content in the large red leather-bound book Liber Novus largely (but not exclusively) come from these journals, written by Jung in 1913-1917.

Notably, Jung still functioned professionally during the daytime when he went through this major personal crisis in 1913-1917. He saw an average of five patients a day at his private practise, he lectured, and he remained active in professional associations. He was also called to be doctor in the Swiss army and was on active duty for several extended periods in 1914-1918.

It was during his free time, at night, that Jung encouraged his imagination run wild and experienced what he referred to as visions, fantasises and imaginations. He kept six journals – now collectively known as the Black Books – starting on 12 November 1913 and continuing in an intense way throughout the summer of 1914. More experiences were added after the summer of 1914, but less frequently. (World War I broke out in August 1914.)

Transferring it into the red leather-bound book

In late 1914 and in 1915, Jung compiled experiences from his black books into a manuscript, together with his comments for each episode. In 1915, he began working on what would be the beautiful calligraphic an illustrated Liber Novus. A further supplementary manuscript called Scrutinies was created in 1917, and might have been intended for transcription into Liber Novus.

Over the course of 16 years, roughly two-thirds of Jung’s manuscripts intended for Liber Novus were actually entered into it, and Jung never fully completed the task before abandoning it around 1930.

Important: The Red Book published in 2009 contains all of the manuscript material that Jung prepared for Liber Novus – not just the material that he actually got around to including.

Towards the end of his life, Jung would say to Aniela Jaffé that “The years… when I pursued the inner images, were the most important time of my life. Everything else is to be derived from this. (…) My entire life consisted in elaborating what had burst forth from the unconscious and flooded me like an enigmatic stream and threatened to break me. That was the stuff and material for more than only one life. Everything later was merely the outer classification, scientific elaboration, and the integration into life. But the numinous beginning, which contained everything, was then.”

In 1959, Jung wrote a short epilogue to Liber Novus, stating that “To the superficial observer, it will appear like madness.”

When Jung died in 1961, he didn’t leave behind any instructions about what to do with Liber Novus. The book was preserved, but not made available to the public, nor to researchers. Up to mid-September 2008, fewer than 25 people had read it.