Carl Jung’s book Wandlungen und Symbole der Libido was published in German in 1912. It was translated into English by Beatrice M. Hinkle and released in 1916 as Psychology of the Unconscious: a study of the transformations and symbolisms of the libido, a contribution to the history of the evolution of thought (London: Kegan Paul Trench Trubner). 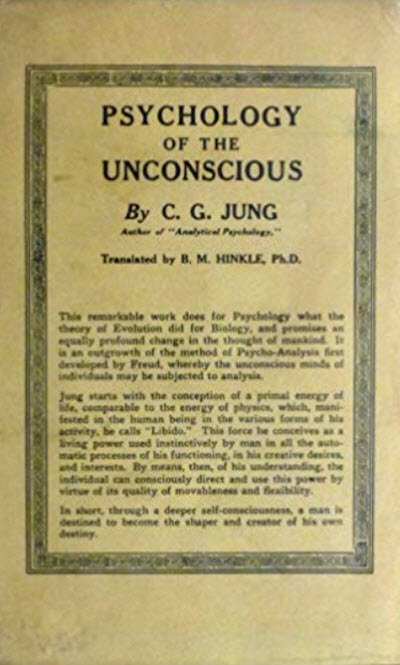 The book was written towards the end of Jung’s intense collaboration with Sigmund Freud, and Jung later described it as a catalyst for their split in 1913. In the book, Jung aired dissenting ideas regarding the nature of the libido.

What’s the book about?

Jung himself described his book as an “extended commentary on a practical analysis of the prodromal stages of schizophrenia” (Jung, [1956] 1967: xxv).

The fantasises of Miss Frank Miller

The starting-point for the book is Jung’s analysis of the autosuggestive writings of Miss Frank Miller, as published by Théodore Flournoy in 1905.

Jung never met her; she lived in the United States and Jung only knew of her writings because they were included in a work by Théodore Flournoy ( August 1854 – 1920), a professor of psychology at the University of Geneva and author of books on parapsychology and spiritism.

Frank Miller was an Alabama-born performer and lecturer known for giving speeches where she pretended to be various historical and cultural figures. In 1905, some of her most vivid historic fantasises, accompanied by her comments and impressions, were published with an introduction written by Théodore Flournoy.

In this own book, Jung outlies what he sees as a crucially significant mythological content in Miller’s fantasies. According to Jung, Miller was exhibiting signs of “prodromal” stages of schizophrenia, and he predicted that she would eventually suffer from a schizophrenic breakdown. Jung seems to have been wrong in his prediction. Miller did recieve psychiatric treatent later on in her life, but she was never diagnosed with schizophrenia.

Jung later acknowledged that his dive into Miller’s fantasises was driven by his own wish to analyze the same critical questions about his own psyche, but that he – at the time – had not admitted that to himself.

Was she named Frank?

In the 1924 edition of his book, Jung claimed that Frank Miller’s unusual first name was a pseudonym, but this was not true. Her real name was Frank and she had been named after her father.